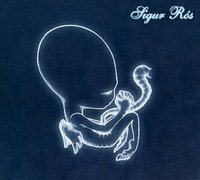 It’s near impossible to describe Sigur Ros without resorting to all things Polar or Heavenly but let’s give it a go. For a decade now the Icelandic band have cut a deep impression, standing apart from their peers in the sheer scale of their music. The words they expel are often indecipherable but it’s the atmospherics that are created from all manner of quirky instrumentation that creates the spellbinding magic. ‘Olsen Olsen’ is taken from their sophomore album ‘Agaetis Byrjun’ that so cast their legend. The bulbous bass is initially what catches the attention but it is soon surpassed by the ghostly singing that appears out of nowhere from a distant snow-capped mountain range (see what I mean!). ‘Olsen Olsen’ also boasts one of Sigur Ros’ most expansive orchestral forays; as the song appears to tail off it is suddenly kicked into life by a series of slalom strings, a host of brass and a cast of thousands. With the season of goodwill on its way why not wrap this in a bow and send it to a forgotten friend. KD