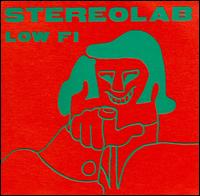 What a dreamy concoction Stereolab used to be (and to a lesser degree still are). On the one hand you had the frothy vocals supplied by French chanteuse Laetitia Sadier with able backup from Mary Hansen, then there was Tim Gane’s spectral Moog emissions and finally there was the odd dash of Beach Boyesque tinkering from Sean O’Hagan. For a while each new release from the band brought wide-eyed variants in what was an unmistakable Stereolab sound. While the band have consistently inhabited the fringes there is such a wealth of precious recordings in their back catalogue newcomers to the band will be thrilled just by dipping in. ‘Low Fi’ is indicative of the early days when the bands tumbling wall of sound was as vibrant as it was melodious. We’re talking a My Bloody Valentine carpet of sound that is instantly soothed by the vocal interplay between Hanson and Sadier. Hanson simply adds in the standard pop refrain of ba-da-bum while Sadier effortlessly billows plumes of elegance from her lips. It’s not an understatement to say that is one of the most remarkable songs of the nineties. KD