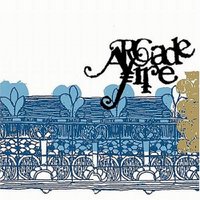 What a year it has been for the Arcade Fire. First their debut album goes on to become the most talked about release of 2005, then they re-release their ‘Us Kids Know’ EP that bolsters an already indefatigable momentum. Add in some pretty spectacular live shows (the Electric Picnic in mid Ireland was one such) and you can’t help but feel that their hands are full to build on the promise when their new album appears next year. It thus seems entirely appropriate to end their year with one of the brighter moments from the aforementioned EP. ‘Headlights Look Like Diamonds’ possesses all the integral Arcade Fire qualities, quirkiness abounds as a bass blows freely alongside a fluffy guitar riff. Wim and Regine cast their vocals about like falling apples and the music appropriates itself to harness the basket of charms dispelled. With the Arcade Fire there are no rules, a song may begin like a lullaby but could conceivably end up sounding like a fading Katrine. Despite the unevenness the constituent divergences consistently prove the old adage that opposites attract. The world is theirs, how they decide to make it a better place will one of the thrills of 2006. KD