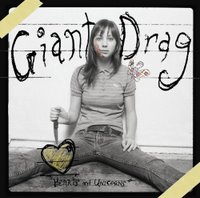 If you fancy a bit of Bjork thrown into several layers of My Bloody Valentine guitar theatrics then ‘Kevin Is Gay’ could be what you are looking for. Annie Hardy sure has that angry indie gal tag even if her mutterings can be as vague as a toddler learning to speak. ‘Kevin Is Gay’ starts and finishes with a decidedly scary volley of poltergeist emissions but in between the sluggish shoegaze chords and Hardy’s understated vocals generate pangs of desire for the early nineties. When a band creates a noise akin to the inside of an airplanes fuselage you’d expect several hitters so it comes as a bit of a surprise that Giant Drag has only 2 members. No sparse White Stripes numbers here though, Hardy and drummer Micah Calabrese create a wholesome sound that’ll fill your head with consummate ease. KD