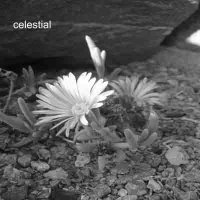 With a list of influences that includes Ride’s ‘Vapour Trail’, Adorable’s ‘Homeboy’ and the House of Love’s ‘Shine On’ Sweden’s Celestial were just too attractive to ignore. They have released 2 homemade EP’s in the last year (the second of which can be downloaded free from here). Celestial revisit a time when jangle pop was the present and the future. The production on ‘The Boy Who Never Says Goodbye’ may be what you’d expect from a demo but the flickering guitar tugs are as heartfelt as Andreas Hagman’s cosy homespun vocals. The evidence on the other songs from the EP suggests that Hagman has enough source material to resurrect Sarah Records from its hallowed grave all on his own. Place this in the same as category as Cats on Fire’s remarkable ‘Higher Grounds’. Shoegaze’s second coming may well be just around the corner if these lads have their way. KD