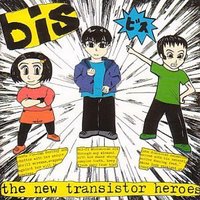 In the days before the internet could be rightly exploited by up and comers many bands adopted a D.I.Y. approach to getting the word out. Scottish band Bis operated on a minuscule budget, released records on tiny labels, wrote their own fanzines and basked in all the attention that a cute trio of adolescents with talent deserved. With their schoolyard monikers of Manda Rin, Sci-Fi Steve and John Disco Bis became the first unsigned act ever to play on Top Of The Pops after one of the shows executives heard their EP. The music was deliciously off the cuff and undernourished sounding like it was recorded using instruments from Toys R Us. ‘Kandy Pop’ is perhaps the best distillation of what they were about. Rin protests like a spoiled brat while the unseemly playing aids and abets. Just as you are about to punch the stop button the fog clears and a chorus as sweet as a Loop the Loop explains everything. The boy/girl refrains are delightfully energetic and the final chord gallops suitably put a seal on what could likely scare secret vampires from their hiding places. You’d think that a project such as this wouldn’t have the legs but Bis boasted an impressive 7 year existence, eventually calling it a day in 2003. KD