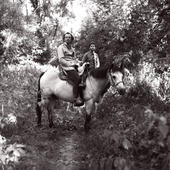 Hey what’s this; a French band setting the mood without the moog? Born on this day one year ago Hey Hey My My consists of Garnier and Gaulier. They take their name from a Neil Young song; you know the one that Kurt used to such chilling effect. Signed to Sober and Gentle they have just released a 5-song demo which is not only superbly accomplished but eagerly demands further listens. The opening track is the most ear catching, simple chord progressions and sequenced vocals recalls a more reserved Spoon’s ‘I Turn My Camera On’. It’s not exactly folk, not exactly lo-fi but perhaps with a dash of latent Grandaddy. Maybe if someone placed a hot poker up Turin Brakes behinds this would be the sonic outcome. By the way, what about that for a band photo, only our European cousins could get away with it! KD

Hey Hey My My – Too Much Space