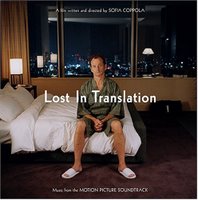 As well as including a My Bloody Valentine classic (‘Soon’) the Lost In Translation soundtrack saw Kevin Shields briefly coming out of retirement. Whether he will ever be pushed enough to record a follow up to ‘Loveless’ remains to be seen but his compositions on this soundtrack prove that his talent remains undimmed. All 4 tracks perfectly fit the purpose for what they were written for, namely adding mood to a movie that scarcely needed it. Each is a success in its own right but ‘Ikebana’ stands out. This is a world away from the sonic montages of his greatest work yet for 90 seconds you’re attention will be completely focused on the soft lilting performance. It’s a shame that the tune finishes so quickly because its core melodies are so exquisite. With some of the careful attention that the man is known for this could easily have been epic. With Shields recently taking the stage with Irish chanteuse Gemma Hayes speculation is again rife that he could be about to deliver on all the promise of a decade and a half ago. KD