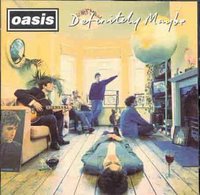 For an all too brief time Noel Gallagher proved to be a talisman in coining off the shelf ditties that could coax a smile from the hardest of critics. This included a clutch of b-sides (‘Half The World Away’ and ‘Rockin Chair’ spring to mind) that were instantly memorable. Nothing was forced and the natural sway to many of the early Oasis tunes proved their winning trait. The early albums are sprinkled with their best material with the energy in the performances proving a vital cog. Who cares if it sounds like someone else if something dynamic and new is brought to the table? Of course, when the occasion demanded Oasis were able to strip down to basics like on ‘Definitely Maybe’s’ closing track ‘Married With Children’. Here the elder Gallagher proved an able alternative to his sibling in the vocal department, deadpan yet tunesome he gets his point across in his uniquely uncomplicated way. The acoustic backdrop is straightforward and quaint, purposely not encroaching on the message. Pure genius, pity the bloated compositions that were soon to follow in its wake. KD