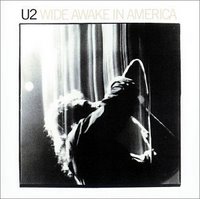 U2’s performance at Live Aid (the 1985 show) single-handedly turned me onto music. More specifically it was the way they played ‘Bad’, an album track from their 1984 masterpiece ‘The Unforgettable Fire’. The live version of ‘Bad’ contains so many more magical detours than the studio version, tender and awkward one minute, proud and regal the next it never fails to affect. ‘Wide Awake In America’ was released at a time when Ireland was rife with unemployment and emigration which meant the young people were either bored silly or about to leave their friends and family for an uncertain life abroad. U2 somehow made the pain a bit easier to swallow, establishing a token of pride in being Irish (something that would escalate as the Football team grew in stature). This was U2’s golden era when Paul Hewson’s bombast could be written off as youthful arrogance. ‘Bad’ is music in technicolor, the Edge’s riffs are expansive, Larry Mullen supplies the necessary rallying beat while Adam Clayton tugs his bass with eager nonchalance. It must have got tiresome for the other members in the band as the lead man pulled a pretty girl from the crowd to dance with but for many of those watching it was inspirational. Oh, I am being sentimental but what childhood memories are not? KD