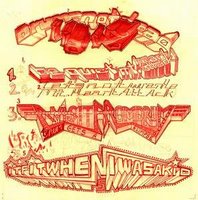 It is rare enough to be hit square between with eyes by a song from a band you’ve never even heard of before. It happened to me a couple of nights back when I was about to depart to the land of nod. ‘The Other Side Of Mt. Heart Attack’ from the Berlin based Liars is so lavishly wonderful that you may well have to forget about sleep altogether. Taken from their critically lauded third album ‘Drum’s Not Dead’ (which contains no less than 36 video interpretations of the music) it is tagged at the end of a lush batch of songs that could see Animal Collective having to up the ante to retain their crown. ‘The Other Side Of Mt. Attack’ is so damn effortless with a coterie of twinkling guitars set to reverb, lullaby like cooing, funeral paced percussion and Angus Andrew’s tender mouthing. This is as delicate as a ladybird and already is a leading contender for song of the year. KD

Liars – The Other Side Of Mt. Heart Attack