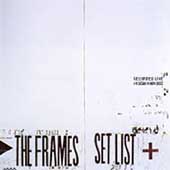 Derided and acclaimed in equal volumes the Frames have yet attract a sizable audience outside their native country. Part of the problem is no doubt down to Glen Hansard’s sometimes nauseating asides at live performances. Here is a man who can’t decipher when something is funny or just plain embarrassing. If you cut out the chat what’s left is undeniably powerful that comes complete with some terrific Willy Wonka references. As a group of musicians the Frames are a talented lot while Hansard himself is a gifted songwriter. Their early albums had a raggle taggle feel to them but ‘For The Birds’ and ‘Burn The Maps’ have added a lofty gravitas. The former is particularly compelling; wearing its heart on its sleeve, in fact in places it is quite moving. The studio version of ‘Star Star’ is nice and quaint but the live version is beguiling as the guitars and strings take on a greater resonance. Taken from the bands 2003 ‘Set List’ live album the magic occurs about half way in, you’ll know it when it happens. Of course, if you use a Gene Wilder’s script you are bound to have a classic on your hands. Leave it to the master Glen and you’ll be alright. KD