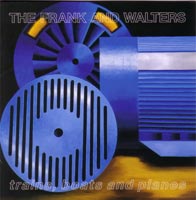 And you thought Sigur Ros were the first to invent their own language. Back in the early nineties the Frank & Walters could be heard the length and breath of the land speaking in a tongue that could only be understood by themselves and a select band of people from the southern capital. Their interview style was shambolic but the hyperbole wouldn’t haven’t been out of place in any top class fringe festival. And what a fringe the boy Linehan had, of lampshade/bowl construction it complemented his bands on stage style of orange dungarees. The Frank & Walters had the t-shirts, the fans and the NME singles of the week but sadly healthy sales just seemed out of reach. A brief look at their discography reveals a warren of classic pop songs where melody is to the fore. The bands early antics were reflected in some seriously silly lyrics (“I saw a blindman he was eating his fork, he says that’s what you got to do to be cool”) and the songs were equally colourful. The zenith of the bands success saw them performing ‘After All’ on Top of the Pops but there were even better songs on their debut ‘Trains, Boats & Planes’ (no John Candy/Steve Martin on backing vocals unfortunately). ‘This Is Not A Song’ is definitely one, a revelatory paean to love. The song sparkles from start to finish as a result of Linehan’s impassioned delivery and the jangling chord procession that falls just short of euphoric towards the end. To their credit the 2/3’s of the original lineup persists along with new addition Kevin Pedreschi and the promised new material this year is eagerly anticipated. It would be a resurrection of Lazarus proportions if they were to pull it off at this stage but in this hippy diddly crazy world that we live in anything is possible. KD

The Frank & Walters – This Is Not A Song