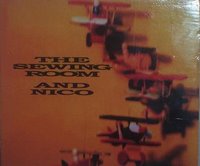 Crumb may be a new band but its players have certainly left of trail of goodies in the form of Hey Paulette (late 80’s janging sensations, John Peel loved ’em), the Sewing Room (moody foursome with killer melodies) and the Mexican Pets (er, nice name). At least two of the three aforementioned deserve a reappraisal but since Hey Paulette were a little before my time I’ll concentrate on the Stan Erraught led Sewing Room. I saw them perform live once and they came across as one of the unhappiest groups of individual imaginable. Erraught himself was a founding member of the Stars of Heaven so the Sewing Room was expected to be the project that saw him become a celebrity. Sadly the band flopped, in part due to the tiny record label Dead Elvis they were signed to. With a budget the size of a shrivelled pea extensive marketing was never a runner. Against the odds the Sewing Room managed to release 2 albums. Their debut ‘And Nico’ was the more accomplished displaying a good grasp on acoustic/country dramas, sweet melodies and subtle key shifts that added a welcome quirky dimension. Highlights included ‘Mobile’, ‘Delve’ and the incomparably jangly ‘Kill Me’. When chords are as loose and shimmering as this who cares if the subject matter is utterly morose. KD

The Sewing Room – Kill Me