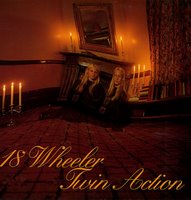 Or Wheeler 18 if you’re Tony Blair. It might be a bit early in the year for Beach Boy harmonies but when the genre is exploited this sweetly its hard to resist. 18 Wheeler ploughed a similar musical terrain to their countrymen Teenage Fanclub, namely shapely guitar chords and even shapelier vocal arrangements. The effect is of a thousand warm evenings on the coast watching the sun going down. Sean Jackson supplied the lollipop vocals and he was joined by dreamy Idha Ovelius on ‘Suncrush’. This song is the essence of the band, audio honey with nice asides like the hanging country doodles. Taken from their long lost debut ‘Twin Action’ this is feelgood music of the highest order. Like a close cousin to what Big Star might have fashioned in their prime. KD