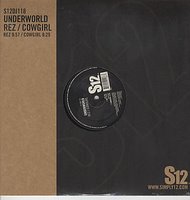 There is a graffiti artist in Dublin who goes by the name of Rez. Not much of an artist really, just splays his signature in various squiggly ways and in a rainbow of different colours. You can see why he’d want to coattail on a colossus though, for certain people his alias is liable to bring back happy memories of times spent in dark warehouses with lots of friendly strangers. The electronic meander that is ‘Rez’ was the moment Underworld proved they could be capable of building on their breakthrough album ‘Dubnobasswithmyheadman’. ‘Rez’ was released as a b-side on the ‘Cowgirl’ single and it mirrored the lead tracks galloping rhythms sans the repetitive vocal thrusts. ‘Rez’ is an astonishing piece of work in 3 parts that extends to just short of 10 minutes. The intro spews molten sirens like fireworks that endlessly repeat the soporific trick. Part 2 is the chill out, where the delicious ratatat is slowly consumed by the monolithic skins. Unearthly sounds drift in and out of consciousness until its time to end with the beginning. It’s easy to get lost in the otherworldliness of it all. Dancefloors and neglected inner city walls were invented for moments like this. KD