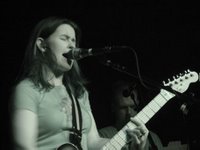 The loss of the Delgados was a big one for those who succumbed to their cinematic creations. Alun Woodward and Emma Pollock were the bands creative hub and the break up has robbed us of a wonderful song writing partnership. It looks like Emma will be first out of the blocks with work due to begin anytime now on her debut album as a solo artist (her husband and ex-Delgados drummer Paul Savage will lend a hand mind). The album will be recorded in the new Blantyre studios in Glasgow and the material should see the light of day by the end of the year. Emma’s greatest strength is her achingly beautiful voice as evidenced on this work in progress which was recorded for BBC Scotland. Aside from a neat piano line and some layered vocals the singer holds court, hooking attention through grace and an ability to swoop where others would merely ramble. The future looks bright, who said break ups need to be upsetting? KD

[US] The Great Eastern