#203 The Darkside – Waiting For The Angels 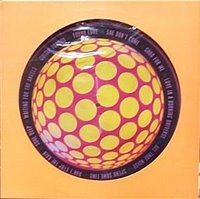 The Darkside was yet another offshoot from the Spaceman 3 dynasty (see also Spiritualized and Spectrum). Consisting of main man Pete Baines (like Jason Pierce’s Spaceman tag Baines chose to be also called Pete Bassman), guitarist Kevin Cowan and drummer Steward Roswell the band recorded 2 studio albums before splitting after numerous line-up changes. ‘Waiting For The Angels’ is taken from their debut and is marked by Cowan’s lavish guitar strokes as well as Baines thoroughly monotone vocals. Somehow the juxtaposition works and the piece has an epic feel even if it does sound of its time. Not quite a sonic boom then, more a tasty auditory snack. KD

The Darkside – Waiting For The Angels

More Info: The Darkside
Buy Album: [UK] All That Noise

[US] All That Noise