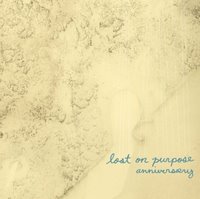 Wil Holland from Cleveland is trying to earn enough money so he can give up his nine-to-five existence. His plan is to write music that people like enough to buy and thus save him from the dreaded wait ’til he turns 65. So far the plan is working pretty well because his solo project Lost On Purpose has built up a big enough repertoire of gilded gems to base a whole alternate career on. All that needs to happen now if for the people to tune in so here’s a heads up in Wil’s direction. His website is a good starting point because it allows you to sample plenty of what he has thus far conjured. Try and imagine Bright Eyes crouched inside your head armed with the minimum number of instruments (to save on space) working his way through his best songs ever and you’ll have a good idea what Lost On Purpose are about. ‘Thank You Music Guru’ is perhaps as simplistic as Holland gets, his pinpoints the creative and executes it in the sweetest way possible. Acoustics shimmer like a ghost in the night and the vocals timidly make like the coolest sound since the theremin was invented. Building gently like a female construction worker it could yet be used by unstable governments to soothe angry mobs. Mr Holland, you’ll soon need a dam to hold back the waves of delight from a legion of fans. KD