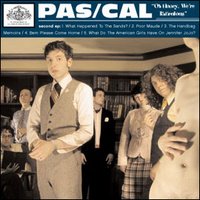 Casimer Pascal’s band have somehow stayed out the limelight despite a melody charged run of EP’s, Christmas singles and a contribution to the Donovan tribute album. Think early Belle & Sebastian b-side with a lorry load of sweetly tugged instruments propping up Pascal’s high pitched vocals. ‘Poor Maude’ is elegantly tailored even if it plays like a song with a thousand different winning ideas, harmonies drip from its sides like ice-cream from an abandoned cone in mid summer. And for such a perfect pop song it somehow extends beyond the strict 3-minute guideline. That said the crash and tumble of the finale brings us back to dull life as seen through the eyes of a 115-year-old woman praying that the end is near. Ah, such a precious dichotomy in a straight ahead pop world. KD