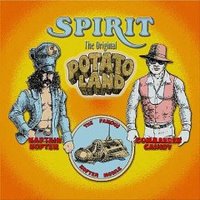 Reading any bio about Spirit is like engaging Lord of the Rings such is the cast of players involved. All mention the genius that was Randy California’s guitar playing who along with his stepdad Ed Cassidy (see, there were forerunners to the Mystery Jets) formed the nucleus of the band. Despite having Jimi Hendrix in their ranks at one stage Spirit never attained their full potential. A catalogue of mishaps and bad mistakes (they turned down an offer to play Woodstock”¦yikes) meant that the albums kept coming along but widespread recognition remained out of reach. Potato Land was recorded in 1972 but was deemed too political by the bands label Epic so was not released until 1981. Based on the concept of the wretched life of potato people on their way to the slaughterhouse (Morgan Spurlock had a ready made soundtrack!) it included precious ditties such as ‘My Friend’. Honky tonking with the best of them ‘My Friend’ has the air of a classic with supreme melodies and a frenetic momentum. Somehow it has been lost through the ravages of time but should rightly stand side by side with other goldies such ‘God Only Knows’ or ‘California Dreamin’. Randy California died in 1997, still a very young man. KD

[US] The Original Potato Land