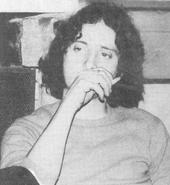 William Souffreau headed up classic Belgium rockers Irish Coffee back in the 1970’s but has been solo since 1990. His sound is from a different time but retains a hugely impressive presence. If Paul McCartney could pull off songs like Souffreau’s he’d still be a million seller. Souffreau inhabits the edges but his appearance on myspace should see his music reach a large collection of interested ears, both young and old. ‘Gardenman’ is easy to absorb with elegant guitar drifts, holiday bongos and Souffreau’s gravely vocals recalling dusk circa late August 1969. Looks like we are in the throes of the most exciting period ever for music with the reach of the internet uncovering a wealth of music like this that would otherwise be lost. KD