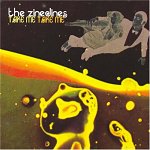 Apparently there is a bit of a retro scene going on in Spain that harks back to the sunnier bands from the 1960’s. Leading the charge are Majorca band the Zinedines (named after the French footballer, hmm) who specialise in Byrdsian effects but combine that with the sound of latter day merchants of shimmering chaos like Teenage Fanclub and more particularly Cosmic Rough Riders. The Zinedines sing in English and there is little or no trace of their native tongue. ‘Twice Upon A Time’ is a warm summer breeze of a tune with plenty of rickenbacker, pleasant harmonies and a laidback feel that’ll have you applying the suntan lotion before you realise it’s raining outside. The Zinedines greatest trick is to bolster an old idea, it could easily sound stale but in their hands it’s as pleasant as fizzy sherbert melting on your tongue. KD

Zinedines – Twice Upon A Time

[US] Take Me Take Me