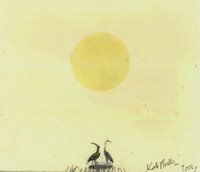 All told 2005 was a pretty good year for post-rock in Dublin when two genuine forces emerged triumphant. God Is An Astronaut are already on the cusp of international acclaim and if 66e’s debut is anything to go by they will soon be following them. 66e do spot their elegant musical frolics with vocals but it’s only when they let their instruments do the talking that they truly illuminate. ‘I Died In A Movie’ and ‘One Cast One Catch’ are superbly crafted instrumentals with buoyant characters that continually shift at obtuse angles. That’s not to say that the music is inaccessible, however, because the bands guitars have their sights clearly set to grand central melody. ‘One Cast One Catch’ is a truly effervescent piece of music, it laps so delicately at your feet that you’re unlikely to see the lethal great white noise about to pounce. 66e are indeed electric. KD