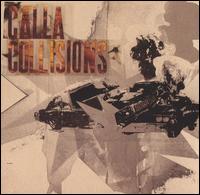 This is turning into a bit of a Denton afternoon as Calla’s origins can be traced back to the Factory Press who were based in the Texan town. That band repaired to NYC and promptly broke up with Calla forming out of its ashes. Calla released their fourth LP ‘Collisions’ last year and ‘It Dawned On Me’ was a single taken from it. The song could be described as Interpol meets the Dandy Warhols (circa ‘Thirteen Tales From Urban Bohemia’) and it is characterised by some seriously spiky guitars. Aurelio Valle has indie cool dripping from his lips and even though his band are not going to change the world their music certainly deserves its place in the upper echelons of the indiepop hierarchy. KD

Calla – It Dawned On Me