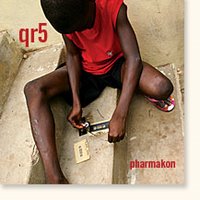 Are there many songs that describe the magical feeling of falling in (or out of) love in a garden? Not many I’d warrant but then qr5 ain’t your average band. The Toronto based collective have taken the unusual step (in today’s retro-riff-heavy climate) of blending reggae with a savvy pop sensibility. While this might be some people’s idea of torture, qr5 twist the genres so satisfyingly you hardly notice the laidback grooves (mon). A lot of credit must go to Matthew Maaskant’s singing, which is as pure as it is soothing. Behind him, the band churns a delicate magic that never intrudes on the singers’ utterances merely bolsters the songs easygoing charms. Whether it will send single people the world over down the garden path remains to be seen, but it should signal that qr5’s time has well and truly arrived. KD