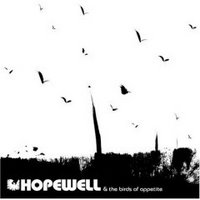 After succumbing to Hopewell’s latest vision nobody could be surprised that the ubiquitous Dave Fridmann sat in on production duties. And the Mercury Rev connections only begin there, as lead singer Jason Russo was a long time member of the Rev, departing following the tour to promote ‘Deserter’s Songs’. Russo’s voice retains an impressive falsetto for nearly the entire misleadingly titled epic ‘Synthetic Symphony’. Everything about the song is impressive, the production is lush, the instrumentation is layered with a precise eye and Russo’s vocal melodies soar and swoop with the audacity of a pilot at the Paris air show. Yep, it is heartbreaking stuff, a million miles away from the faux dramatics of Keane or dare I say it (current album) Coldplay. Take solace though, the fact that Hopewell are not selling millions is to our benefit, as they have to try harder on each subsequent release to further prise away our delicate blood-pumping organ from its already gasping frame. KD

[US] Hopewell & the Birds of Appetite