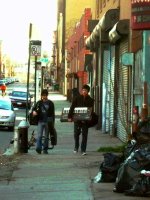 When On! Air! Library! broke up it didn’t take long for its main protagonists to set up shop elsewhere. The new incarnation is Daylight’s For The Birds, which originally included both Philip Wann and Claudia Deheza. While Claudia’s role has diminished since her move to A Cloud Mireya she has nonetheless left a gem of a performance on ‘For Now’. Although presented here at demo stage it is has a swirling geniality that will create a lot of goodwill for the group. The are nods to a less frenetic Lush here which can only be a good thing. With Claudia gone Amanda Garrett has become the bands new singer and you can find ample evidence of her talent on the bands myspace page. With 12 full songs recorded Daylight’s For The Birds debut album is expected this autumn, expect a grand affair. KD

Daylight’s For The Birds – For Now