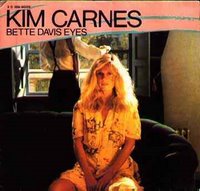 Ms Carnes may not have been the most famous Kim from the decade that time forgot but she certainly recorded one of its most potent songs. ‘Bette Davis Eyes’ resulted in the L.A. singer having a very long stay at the top of the charts in the early eighties. Despite writing pieces for such luminaries as Frank Sinatra and Barbara Streisand ‘Bette Davis Eyes’ was not a Carnes composition. It was in fact written almost a decade earlier by Donna Weiss and Jackie DeShannon. Carnes version is characterised by her throaty vocals and the incredible shimmering chords that run the whole length of the tune, this is made all the more remarkable when you consider the song was recorded live on the second take. ‘Bette Davis Eyes’ so impressed the actress who was the subject of the song that she wrote to Carnes to thank her for making her ‘a part of modern times’. The pair became friends before Davis’ death in 1989. KD

50 FREE Downloads. eMusic for your iPod® or any MP3 player