Lunchbox – In My World 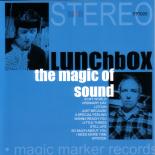 A friend of mine with a penchant for Olivia Newton John’s music once commented that ‘In My World’ sounded like the epitome of indie. Not sure if it was a compliment but since he rarely passed comment on the racket going on in my corner of the room I took it as one. Lunchbox operated primarily as a duo with Tim Brown and Donna McKean juggling the instruments alongside a revolving door cast of drummers. ‘The Magic Of Sound’ is regarded as their creative zenith with its surfing Stereolab guitar meanders and organs from outer space. ‘In My World’ is pretty twee but so deliciously so that it’s impossible to show it the door. Brown’s vocals are supplemented by McKean’s fluffy background chirps to craft a wholesome soundtrack to get physical to. KD

Lunchbox – In My World