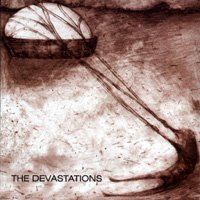 Australian band the Devastations signed to Beggars Banquet last month. Already home to Mark Lanegan and Tinkersticks it looks like a sensible signing when you listen to how the Devastations sound. The spectre of Nick Cave and Stuart Staples loom large in Conrad Standish’s throat yet the Devastations richly plunder the brighter, less melancholic moments from his influences respective bands. Their new album is called ‘Coal’ and features the exotic charms of one Bic Runga. The band have returned the favour by acting as Runga’s backing band on her current tour of Ireland and the UK. Take a look at their myspace page for a quick introduction to the new album. ‘Sex & Mayhem’ is particulary impressive, so out of kilter with the latest indie goings on and all the better for it. Included here is ‘Leone’ which is taken from the Devastations self-titled debut released back in 2003. KD