The Land Of Nod – Half Lit Reality Channel 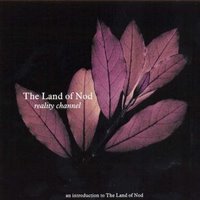 The Land Of Nod received a much needed retrospective in 2003 from Ochre Records called ‘Reality Channel: An Introduction To The Land Of Nod’. The highlights are chosen from a 4 album discography and is a delight for fans of Spiritualized pre their descent into gospel. In other words the guitars are set to reverb and the laidback vibes are as omnipresent as sock stalls at a Red Hot Chilly Peppers concert circa 1992. Characterised by an absence of vocals most of the Cheltenham bands output has a trippy, circular twinkling riff motif as evidenced by the tracks included here making them able ambassadors for the space rock genre. There is surely a ready audience pining for the days when pop was as dreamy as an English Football fans World Cup aspirations. KD

The Land Of Nod – Half-Light

The Land Of Nod – Reality Channel