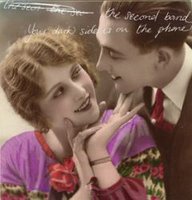 The Second Band might be the strangest thing this side of Beirut but it’s hard not to fall for their charms. Perhaps this is the result of growing up in a village in an isolated part of Northern Europe or maybe the Second Band are just a beautiful accident. ‘Accordion & Guitar’ is taken from a demo called ‘Angel & I’ which was recorded in 2003. For some reason it reminds me of Alfie, perhaps it’s the way the folk-pop sound swells and contracts. This is about as far away from commercial radio that you are going to hear but it is so deeply magical (stray piano keys (again) excepted) that it could grow fungus like to your person if exposed too often. At this rate the Second Band are becoming as crucial as a second TV at World Cup time. KD