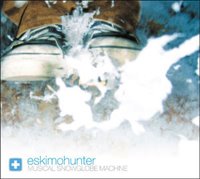 The shoegaze renaissance continues to flourish with Eskimohunter’s unadulterated take on the scene that celebrated itself. Led by Jason71 Eskimohunter have been on the go since 2002 and their ‘Musical Snowglobe Machine’ EP from last year marked a new high for the band. Opening track ‘Walking Tour Of Space’ reveals their multi-textured approach as initially marked out by My Bloody Valentine. The singing is typically obtuse, merely acting as another powerful prong in the all out aural attack. I’d imagine ‘Walking Tour Of Space’ would have some cowering for cover but by letting it breath you can pick up on the subtleties that lie at its heart. Eskimohunter have already licensed their music to MTV’s ‘Real World’ and have made inroads in the highly respected CMJ Top 200 so it would seem that their star is certainly on the rise. Eskimohunter gets hugger’s seal of approval.
KD