Times New Viking – We Got Rocket 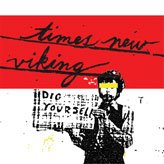 Geez, I need to clear my head of all memories from the last couple of footballing hours. Yep, the aristocracy has been slain by a master class in organisation and mental strength. Ah well, I guess in 4 years time Lionel Messi won’t have to sit on the sidelines waiting for his chance. Ok, here’s Times New Viking, a band who released a few cassettes and were promptly forgotten about until the owner of a defunct label heard some of the tracks. He promptly reconvened his project for the sole purpose of releasing the unloved music. Cue, universal acclaim for the ramshackle audio with a bulging heart. ‘We Got Rocket’ probably won’t be many people’s soup yet the way it discards it functions about the place is the perfect two fingered salute to an industry sold on pristine knob twiddling. Here’s to not playing it by the rules, where heart finally gets a look in over a level head. KD

Times New Viking – We Got Rocket