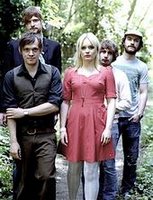 Field has appeared many times in the world of indiepop. So far we’ve had the Magnetic Fields, the Field Mice, Field Notes and Stars of Track & Field. Fields have gone one step further by not including any filler whatsoever. The band boasts an international cast of members from such exotic locations as Reykjavik, London and Birmingham. They are about to go on an enticing tour with Wolfmother, iForward, Russia! and the Maccabees which will go a long way to snaring lots of new fans. Future dates including supports to the Radio Dept. and (the criminally underrated) My Latest Novel. ‘Charming The Flames’ is a demo track that plays like a fully formed Arcade Fire composition. Its formula is multi-layered, frequently furnishing the listener with several avenues of unparalleled discovery. This is a mouth-watering taster for their new EP ‘4 From The Village’, which is out later this month. KD

More Info: Fields
Buy the EP: [UK] 4 from the Village