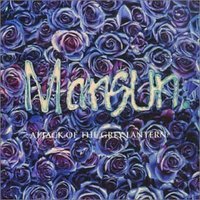 I always thought Mansun were a bit too cerebral for their own good. Take a look at their website and you’ll see what I mean. They could quite clearly write a pretty tune but they often got caught up in the dynamics rather than letting their creative juices flow. There were notable successes, however, when the detail resulted in an epic. ‘The Chad Who Love Me’ (Dominic Chad being the bands guitarist) is one such. Flush with James Bond styled strings it is a thrilling example of Paul Draper skills as a songwriter. The piece could work just as well without the vocals but their crashing entrance sparks another twist in the tale. Also of note is Chad’s guitar work, which soars majestically without ever descending into pastiche. Mansun called it a day in 2003 as their star was truly beginning to wane. Each of their 3 albums has merit, with ‘Attack Of The Grey Lantern’ being particularly notable. Paul Draper is about to embark on a solo career so we eagerly await developments. KD

Mansun – The Chad Who Loved Me

[US] Attack of the Grey Lantern