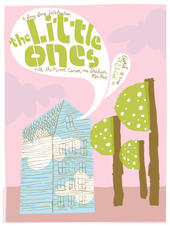 I dunno, perhaps whimsy is coming back into fashion. Maybe the world is getting sick of sharp angular pop and is turning towards a place where everybody smiles as they gently cajole noises from their overly curved instruments. In this place resides a band from California who along with being the sweetest fantasists on the planet also sing songs that contain a veritable treasure chest of plush ideas. ‘Cha Cha Cha’ is utterly adorable with its selection of shimmering guitars, heavily sedated animal on drums and a singer who still plays imaginary games with a sackful of marbles. This will hardly break into daytime schedules, but then that’s the world’s great loss. As Wonka might have put it this is a work of pure imagination. KD

The Little Ones – Cha Cha Cha