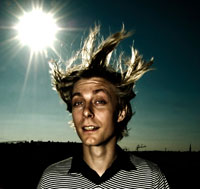 No surprise then that it was an email from South Ambulance that pointed the way to their countrymen Gamba. Cut from the same cloth as Labrador’s finest purveyors of wispy dreampop Gamba only formed late last year but already have a amassed a stock of wondrous pop nuggets. According to lead singer Daniel Gamba (who incidentally is a member of South Ambulance, the penny drops!) the only thing stopping them from releasing an album is a lack of time and money. Listening to ‘Zimone’ you realise its certainly not a lack of talent because the song is chirpier than the chirpiest thing you’ve ever laid ears on. The quaint intricate playing throws up plenty of pretty noises while Gamba does his best to evoke a whimsical backdrop. This is impossible to dislike, much easier to have it as your new not-so-imaginary friend. KD