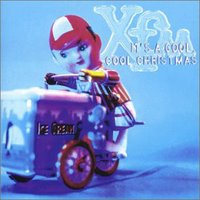 If you like Christmas music then you’ll love the mp3hugger curated Christmas compilation ‘An Indiecater Christmas’, you can buy it here!

For some reason I’ve always found ‘Little Drummer Boy’ to be one of the least palatable songs on the Christmas playlist. I dunno it just seemed a little boring and repetitive. It took a dose of the Dandy Warhols to change all that as their angle has the necessary oomph to free up snowed in villages. This is another track from the XFM ‘It’s A Cool Cool Christmas’ compilation of 2000 released on the Jeepster label. The Dandy’s were in the midst of their most creative periods as ‘Thirteen Tales From Urban Bohemia’ demonstrated that they were capable of producing consistent albums as well as fantastic singles. Their version of the standard pulls all their creative impulses into a daydream packet of yuletide noise. It’s to their credit that could so clinically metamorphose one mans snooze into anothers headbangers ball. KD