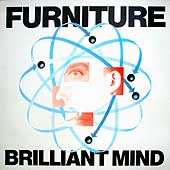 In the world of glorious failures surely none was as stark as the story of English band Furniture. With the world seemingly at their feet after breaking the Top 20 with the ‘Brilliant Mind’ single their label Stiff Records became a corpse. At this stage 30,000 copies of the bands ‘The Wrong People’ lp had been pressed but with the label rapidly crumbling the record was promptly deleted. Due to legal wrangling that followed the band were unable to take up on offers from potential suitors and the initiative was slowly lost. An acclaimed ‘Best Of’ was released in 1991 (‘She Gets Out The Scrapbook’) highlighting what the world had lost. ‘Brilliant Mind’ appeared on the soundtrack to John Hughes bratpack feature ‘Some Kind Of Wonderful’ and remains a visceral piece of 1980’s pop. Jim Irvin’s voice has that laconic Ian McCulloch style, the bass lines punch like Peter Hook is in control and the percussion is so fabulously loose and freewheeling is easy to see how drummer Hamilton Lee went on to found Transglobal Underground. ‘Brilliant Mind’ is a seminal piece of music, something that must fill Irvin with pride as he sits down to write another review for Mojo Magazine. KD