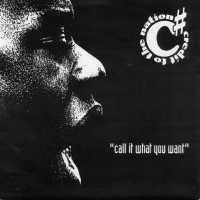 Apart from the occasional dip I haven’t really been able to take Rap to my heart. Mike Skinner certainly has something I can grasp but for most of the time I am oblivious to its charms. Now and then, however, something does come along that is hard to ignore. ‘Stan’ is an obvious example but back in 1993 it was Credit To The Nation’s ‘Call It What You Want’. The song was helped in no small measure by the riff lifted from ‘Smells Like Teen Spirit’ but you are quickly drawn in by the rappers anti-racist sentiments. Credit It To The Nation comprised solely of MC Fusion and announced the first round of British Rap artists. Listening to it now it is somehow reassuring to hear that ubiquitous early nineties rolling bell toll spiralling about in the background. Credit To The Nation didn’t set the world alight but managed to again endear himself in indie circles in 1998 by sampling Radiohead’s ‘High & Dry’ (‘Tacky Love Song’). KD

Credit To The Nation – Call It What You Want