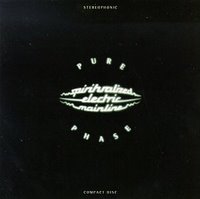 Before the gospel there was the shimmer. Spiritualized rose from the embers of the hypnotic Spaceman 3 collective and in doing so carried on the grand old tradition of the liquid musical extravaganza with sombre lyrical accompaniment. The trick worked sublimely for Spirtualized’s first 2 albums but then Jason Pierce saw fit to change things. I started to lose them at this stage, being unable to resist the long pulses of energy of the early albums. ‘Lazer Guided Melodies’ was an immaculate collection split into a quartet of intermission free near instrumental delights. ‘Pure Phaze’ broke it down a little but still served up reminders of what good drugs Pierce and co were getting their hands on. ‘The Slide Song’ is ruthlessly efficient in delivering its message, the jangling chords replete with hazy feedback pose unashamedly with an electro flute while Pierce dispels his innermost with slowmo mind bending powers of persuasion. Oh how the lads and lasses from the summer of 1969 could have ingested its woozy vibes. KD