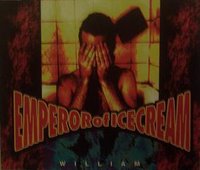 The future looked bright for 4 young Cork lads when their band Emperor Of Ice Cream was signed to Sony’s cool offshoot Blow Disc’s. Despite releasing a succession of great singles it seemed that the lack of public appetite finally took its toll. They also left a brilliant Fanning session, which even surpassed what was produced in the studio. The ‘William’ EP was released in 1993 and displayed lead man Haggis’ gift for melody and his appreciation of the merits of all things Ride. Ok, the chords are a tad telegraphed but given time the collective could have mastered what the likes of My Vitriol were grappling with years later. The bands guitarist is currently in ramshackle noise makers Sylvia’s Saint, the others are probably at this moment ironing their shirts for work tomorrow. KD