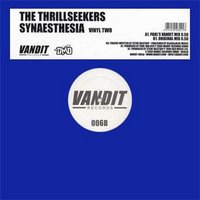 A lot of what came out of the trance scene was faceless, the architects of the tunes seemingly anonymous clones eager to jump on a phenomenally popular strand of dance culture. This often meant that most disappeared after their momentary spot in the neon spotlight. The Thrillseekers is the work of ex-computer game maker Steve Helstrip and his most aluminous effort was ‘Synaesthesia’ which remains a glowing touchstone. Synaesthesia is a condition where a particular sound can trigger a visual that is not there, or vice versa. Syd Barrett of Pink Floyd was known to have the condition but how much of this can be put down to his drug intake is open to question. Helstrip’s tune certainly conjures the feeling of whishing through the air and at its most devastating you may indeed feel as if a man can fly. KD