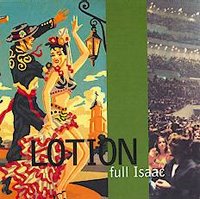 Lotion remind me a little of the Wrens, some by their sweeping music but mostly by the fact that both have the culture and talent yet little in the way of recognition. So by twinning ‘The Meadowlands’ and ‘Full Isaac’ together you get a sumptuous package of delights that could see you through any desert island stay. ‘Full Isaac’ was released back in 1994 and while the band has since disintegrated their treasurable output lives on. Tony Zajkowski provided the mature vocals (in a semi-Stipe type of way) while his band cooked up a storm around them. ‘Around’ is one of the many highlights on ‘Full Isaac’ with an effortless flow it’s the sort of song that you don’t want end. There is the lavish bass entrÃ©e, a main course of heartfelt words and an aperitif that piles on the strings. Zajkowski is now in a band called Honeycomb who won an American Music Award for best-unsigned act award in 2003. Oh, the travesty of it all. KD