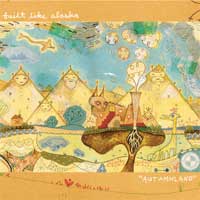 Ploughing the same territory both musically and physically as Grandaddy Built Like Alaska have slipped rather gently into the night. Despite releasing a sophomore album of real worth in 2005 their stock has hardly raised a jot. This means that mini classics such as ‘Random Car’ have fallen through the world’s collective fingers. A couple of years back Modesto underwent a flurry of activity as labels scoured the dusty streets for the next Grandaddy. Built Like Alaska proved to be a particularly good fit. Neil Jackson is the chief songwriter and it’s hard not to hear Jason Lytle’s voice in his outpourings. The band itself has a kooky edge, displaying flitting organs and chiming chords in spades. Perhaps if Built Like Alaska had appeared from the slopes of the Alps they could have shaken the nagging second best band in Modesto tag (but they’re from Oakland) and have infiltrated a million stereos by now. KD