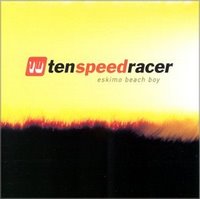 Tenspeedracer certainly had the pedigree to snatch the laurels but most of the world ignored their pretty audio dramas. Some of this can be put down to extraordinary bad luck, like when their make or break slot on college radio schedules throughout the US was set for September 11, 2001. ‘Eskimo Beach Boy’ was the bands debut, which brought together their three early singles that had up to that point only received an Irish release. They went on to record a second LP but the relative success of several solo side projects incrementally broke up the band. Joe Chester (once of hugger faves Sunbear) is responsible for the not so intrepid yet magical ivory tinkling on ‘Yo-Yo’, a ten-minute fuzzy indiepop song to serenade your fragile self. Terry Cullen’s vocals are a lot less bolshie than Dermot Barrett’s, approximating the best twee bandleader that ever was. This is one to soundtrack your workplace daydreams of a life not timetabled by the clock in/out card. KD