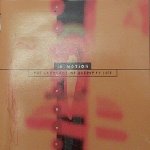 As spirited and downright melodic as anything to ever have come out of Labrador In Motion were a short lived Dublin band led by Alan Kelly. Signed to the legendary Dead Elvis label they only ever released one album ‘The Language Of Everyday Life’ which had a limited run of a 1000 copies. The production lacked clarity, which meant the melodies had to work hard to be heard above the fuzz. Thankfully each of its 8 cuts were lavishly endowed with vocal hooks and abundant jangling guitars. Alan Kelly’s words are often masked in a harmonious free for all yet the music often raises the bar as on ‘Five And Twenty Thousand Days’ where a trumpet soars so triumphantly it’ll have you welling up. The inescapable euphoric feeling that pervades throughout In Motion’s music never really found an audience so here’s your chance to be whisked off your feet. Alan Kelly is still making music through the hushed beauty that is his Last Post. KD