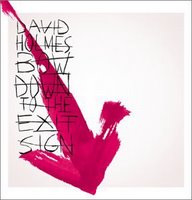 One of the brighter moments in the overrated ‘Ocean’s 11′ occurred during the credit roll when David Holmes imperious ’69 Police’ snaked into view. Originally appearing on the ‘Bow Down To The Exit Sign’ album it marked Holmes out as a force to be reckoned with. The Belfast native seemingly endless appetite for sampling forgotten gems gives his music the edge, yet ’69 Police’ is unquestionably a work of true originality. Based around a circular organic foray it is instantly digestible yet alluring enough to warrant repeated visits. Taking ‘Fade To Gray’s polished lead it begins its sortie with a French voice before descending into a hallucinogenic ride that throws a kitchen sink worth of keyboard wizardry in the general direction of the listener. Despite these electronic distractions the solid core melody is what is so enticing and what’ll have you trying moves that may do your back in. KD